After a 4-hour drive home after a few days away, we finally pulled onto the drive.  With a sigh and a conscious mustering of energy, I attempted to swing myself from the car. Emma, sat in the passenger seat, suddenly pointed out of the window at the front wall of the house and said, ‘ruby-tailed wasp!’ I was a bit suspicious of her identification as this insect was 4-5 meters from where we were sat and can’t have been greater than 5mm in length. I humoured her by attempting to, and succeeding to, capture the little guy in a chewing gum container. She was right. Apparently she could see the red jewel-like abdomen glinting in the sun.

We have seen one of these beautiful creatures before and the previous encounter was, again, at the front of our house on the stone work. It turns out there is a good reason for this which I will divulge later.**

My mission now was to get some macro shots from inside the house before letting it go back where it was found. I know from experience how difficult photographing insects can be, especially fast moving, tiny, flying ones. So to slow things down I offered up a drop of maple syrup and ‘bingo’ I had my shot. 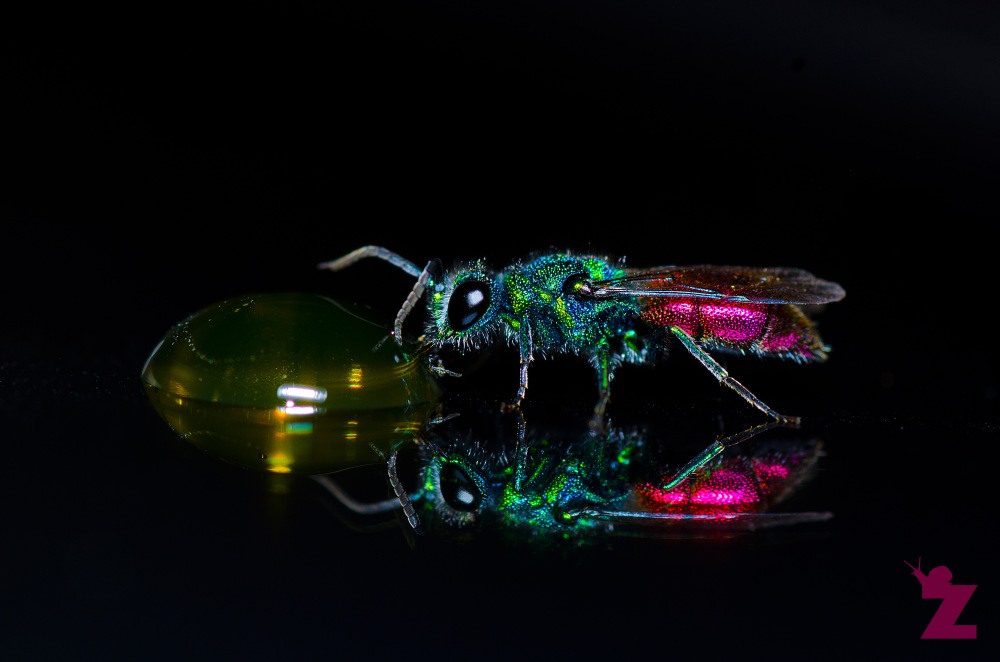 Once back on the stone wall of our house the little guy took some time to clean off any and all icky human contamination, allowing me a few more shots before it was gone with the wind.

Ruby-tailed wasps get their common name (unsurprisingly) from their ruby-red coloured abdomen. They are also known as emerald wasps (10 points to anyone that can guess the significance of that name) and also Cuckoo wasps. To make life difficult, there are actually several species found in the UK that are commonly grouped as being ruby-tailed wasps and they are very difficult to tell apart. They are all part of the family Chrysididae which is a large group of parasitoid and kleptoparastic wasps. (A kleptoparasite is an animal that takes food from another that has caught, collected, or otherwise prepared the food, including stored food.)

*And now to shed some light on the title of this post. As you may have already realised, the deadly ruby–tailed wasp is only deadly to their unfortunate host species, solitary bees and wasps. The ruby-tailed wasps, like the rest of the family Chrysididae, take advantage of nests made by these solitary bees and wasp, laying their eggs within them. The ruby-tailed wasp larvae hatch and consume the hosts egg’s/larvae before consuming the food that the host had gathered for their own, now consumed, offspring.

**The reason why our only two encounters with ruby-tailed wasps happen to be on the stone walls of our house is that their hosts use small holes in the mortar to make nests to conceal their eggs. The stone wall is therefore a prime location in which to search for their hosts.

Ruby-tailed wasp are solitary and do not live in large social groups like some other bees and wasps. They have some adaptations that help protect them from their angry hosts, if they should enter a hole and find an adult. They have a very hard exoskeleton that protects them from stings, and are capable of rolling into a tight ball thanks to the concave underside of their abdomen.

Of the many species of ruby-tailed wasp found in the UK, Chrysis ignita is supposedly the most common. Chrysura hirsuta and Chrysis fulgida are classified as Priority Species in the UK Biodiversity Action Plan.

As for our little fellow, we aren’t going to hazard a guess… but I am calling him Reginald. 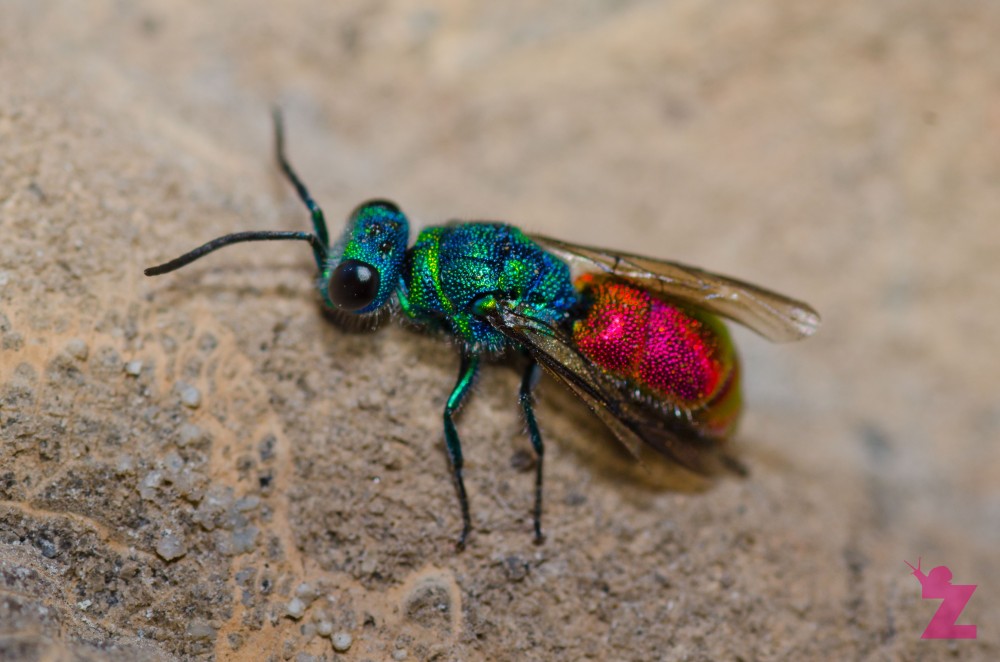