Now 250km in to my 1000km charity bike ride; tired, sore and almost at the brow of the last hill of the day, I cycled past a male stag beetle wandering out from the grass verge and heading straight for certain death in the two-way traffic.

‘But I’m so close to the top of the hill and the campsite!’ was my first thought. Somewhat reluctantly, I turned around and edged out to rescue him. This was my first encounter with a stag beetle and I am glad I had the energy to go back.

At the end of my cycle across France, we spent a few days in Basque Country (northern Spain). One morning, Emma spotted another beetle appearing from beneath our parked car. This was my first encounter with a female stag beetle.

After consulting a few dedicated invertebrate and stag beetle Facebook groups, we had a good idea of the species we had found. The species is Lucanus cervus (of which their are four subspecies). Remarkably we had found the only one of several Lucanid (stag beetle) species in Europe that we could also have found in the U.K. Not only that, we had found both a male and a female. 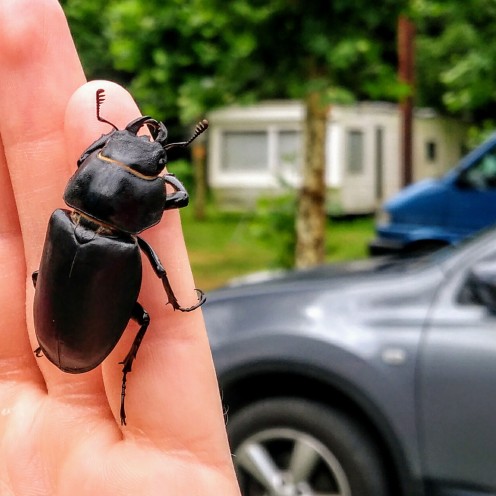 L. cervus is widespread in Europe, but in many European countries the species is red-listed and has undergone population declines. Stag beetles are now extinct in Denmark and Latvia. Back in my home country, England, they are confined to the South East. They are the UK’s largest terrestrial beetle.  There is another species in the UK that can be confused with L. cervus, the lesser stag beetle (Dorcus parallelipipedus). To the untrained eye, both the male and female lesser stag beetle look similar to the female L. cervus.

As you can see from the images, the two individuals we found are quite different from each other. All males and females of a species have differences in their sexual organs, but when other physical differences are apparent, we call this sexual dimorphism. Being sexually dimorphic, the males have enlarged mandibles and are larger overall than the females. Their enlarged mandibles are used in combat with other males. This behavioural function, as well as the physical resemblance to the antlers of male deer, are the reasons for the beetle’s common name and species name (‘cervus’ meaning ‘deer’ in Latin.)

Stag beetle females lay their eggs in decaying wood in which their larvae then live within and feed upon. The majority of a stag beetle’s life is spent as a larva underground. In some instances, larvae can remain in the ground for 7 year before leaving the soil, building a cocoon, and then metamorphosing and pupating into an adult beetle. Once an adult, their mission is to find a mate. For an adult stag beetle, time is of the essence as it can be as little as a few weeks or months before they die.

In many places, stag beetles are struggling due to a variety of factors. These include:

L. cervus is classed as a ‘protected species’ in the UK, listed on Schedule 5 of the Wildlife and Countryside Act 1981. They are also legally protected from sale in the UK.

If you come across a stag beetle, it would be great if you could record your sighting here and leave him or her well be, as long as he/she isn’t in direct danger of being crushed by foot or wheel. If you have to move them, please do so only a short distance. Finally, if you are a woodland manager, part of a local council, or garden owner, you can really help out these magnificent creatures by leaving some wood where it falls, or by building log piles with the help of this instruction sheet.