Within a week of being back in the country, we had somehow landed a short-term contract working with honey bees. Emma and I had put on bee suits before and photographed a friends bees but that was the extent of our experience.

For this work, we essentially drove around the Whanganui/Manawatu regions of the North Island of New Zealand assessing hives for various characteristics, whilst tagging and scanning the boxes.

The scenery between locations and from the hives themselves was stunning. I often wondered if in choosing the location to put the hives the views were an influencing factor! 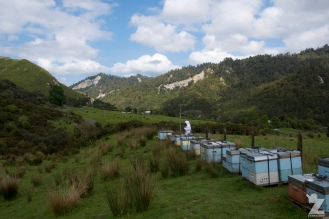 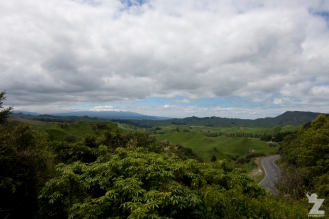 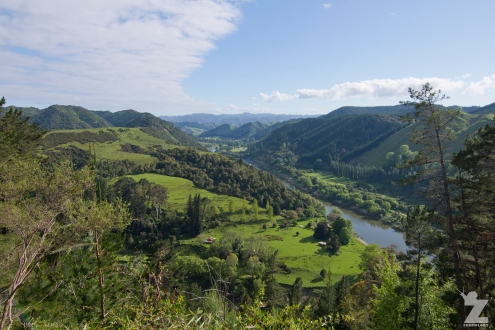 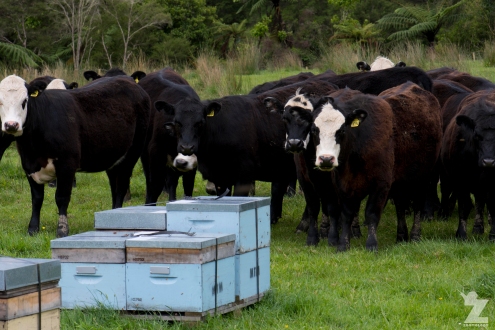 New Zealand had 7,836 registered beekeepers as of June 2017, who collectively owned over 813,557 hives . In 2015/16 the total honey production was 19,885 tonnes and worth more than NZ$315,000,000. The production of mānuka honey, valued for its topical antibacterial properties, is an increasingly valued product. Mānuka honey is produced by bees collecting nectar from the mānuka plant (Leptospermum scoparium), a scrub-like tree native to New Zealand and Australia. 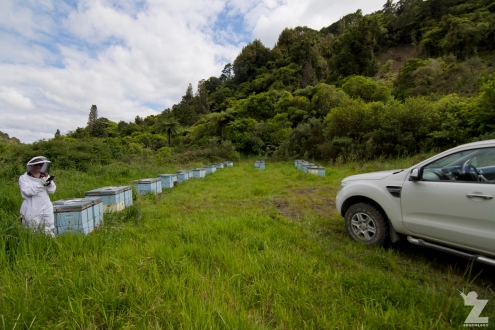 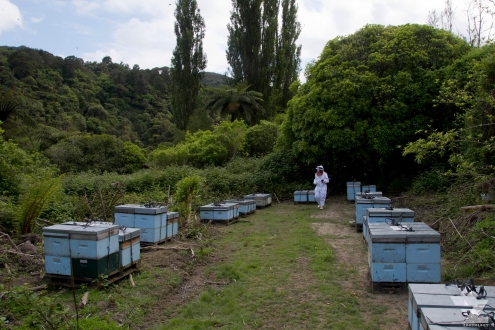 New Zealand has 28 native and 13 introduced species of bee. One of the introduced bees is the honey bee (Apis mellifera). This bee is also known as the European or Western honey bee, and is the most common of all honey bees worldwide. The species is believe to have originated from Africa or Asia and was one of the first insects to be domesticated.

Apis mellifera is the primary species kept by beekeepers today. These bees produce honey in large quantities which would naturally then be stored for the bees to consume in the winter. Humans manage the hives for mainly honey production (and some other products), but crop pollination is an important role played by honey bees.

Due to human cultivation of honey bees, Apis mellifera is now present on every continent except Antarctica and is, as a result, the single most important crop pollinator.

Like all honey bees, the European honey bees live in colonies. Colonies can consist of thousands of bees. The average population of a healthy hive at the peak of summer may be as many as 80,000 bees.

These colonies show eusociality. This involves cooperative brood care, having overlapping generations, and splitting the colonies labour into reproductive and non-reproductive groups who are behaviourally specialised for their roles. These specialised groups are called castes.

Honey bees have perennial colonies that last from year to year unlike other bee species. The colony can be considered a superorganism because the colony can reproduce to form another through the process of swarming. This occurs in the favourable conditions of spring or summer.

In the original hive, the daughter queens hatch and fight until only one of these queens remain. As a virgin queen, she can lay eggs that become fertile males, but in order to have female worker offspring she must undertake one or more nuptial flights where she will mate with multiple drones. After this, she has all the sperm she needs for her lifetime. She then remains in the hive and continually lays eggs.

Individual bees undergo complete metamorphosis going through 4 life stages; egg, larva, pupa and adult. Once the eggs hatch into larva, they are fed by ”nurse” worker bees until a week later when they are sealed into their cells (becoming pupa), and a week after the brood emerge as adults. 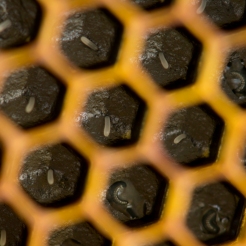 The colonies consist of a single fertile female AKA “the queen”, many sterile females AKA “workers” and a small proportion of fertile males AKA “drones”. I will introduce each of these castes below. 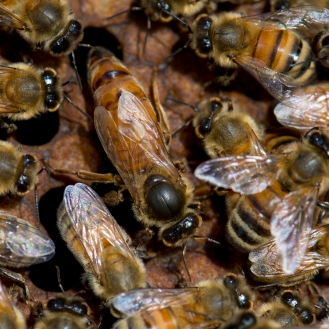 For the first three days, the workers feed all larvae royal jelly, but those destined to be workers are switched to a bee bread diet (mixed pollen and nectar) for the remainder of their development. If their diet isn’t switched, and they continue to be fed royal jelly, the larvae will develop into queens. New queens may be produced if either, the hive is too full of honey for the production of further workers, or if the queen is failing or dies suddenly.

Queens control worker bees by producing a complex suite of pheromones known as queen scent. At the height of the season, the queen may lay over 2,500 eggs per day (more than her own body mass). She fertilises eggs with stored sperm from the spermatheca as they are laid. Eggs laid in drone-sized (larger) cells are left unfertilised, becoming drones with half the genes of worker bees or the queen.

Workers are sterile females produced by the queen that develop from fertilised, diploid eggs. Workers are essential for social structure and proper colony functioning. They carry out the main tasks of the colony. These females will raise their sister workers and future queens.

Worker bees secrete the wax used to build the hive, clean, maintain and guard it, raise the young and forage for nectar and pollen. 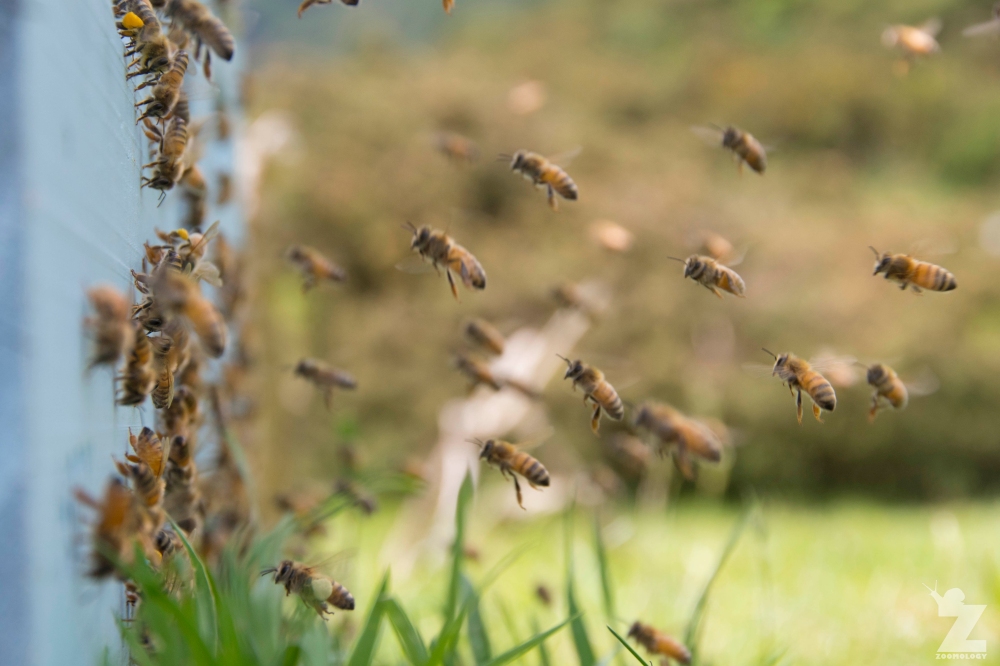 The roles played by worker bees varies with age. For the first 10 days of adulthood, worker bees clean the hive and feed the larvae. After this they start building comb cells. Between 16-20 days of age, workers receive nectar and pollen from older workers and store it. After this period they leave the hive and forage for the remainder of their lives. The life span of a worker bee varies depending on the time of the season. They may live a few weeks in the height of busy summer or month in a slower autumn.

Worker honey bees carry out several different dances aimed at other bees within the colony. Scientists have studied these dance and have shown that they direct other bees to food sources. Two of these resource orientating dances are the round dance and the waggle dance. They also communicate with each other using a jerking dance and a vibration dance.

Workers have a modified ovipositor (egg laying device) that is used as a stinger. This stinger is barbed. It is torn from the body when used in defense along with its venom sac, musculature and ganglion, so that it can continue to administer venom.

The primary purpose of a drone is to fertilise a new queen. Many drones will mate with a given queen in flight and will die immediately after mating. Drone honey bees are haploid (single, unpaired chromosomes) descended only from their mother (the queen).

In temperate regions, drones are generally expelled from the hive before winter, where they die as they cannot forage, produce honey or care for themselves. The reason for this is because they would otherwise consume valuable resources.

So that’s what all the buzz was about!

Bees are truly fascinating creatures. The more I learn, the more I find there is to learn. Getting to work alongside knowledgeable bee keepers in the field was a great experience, even if I got stung though my suit a few times. 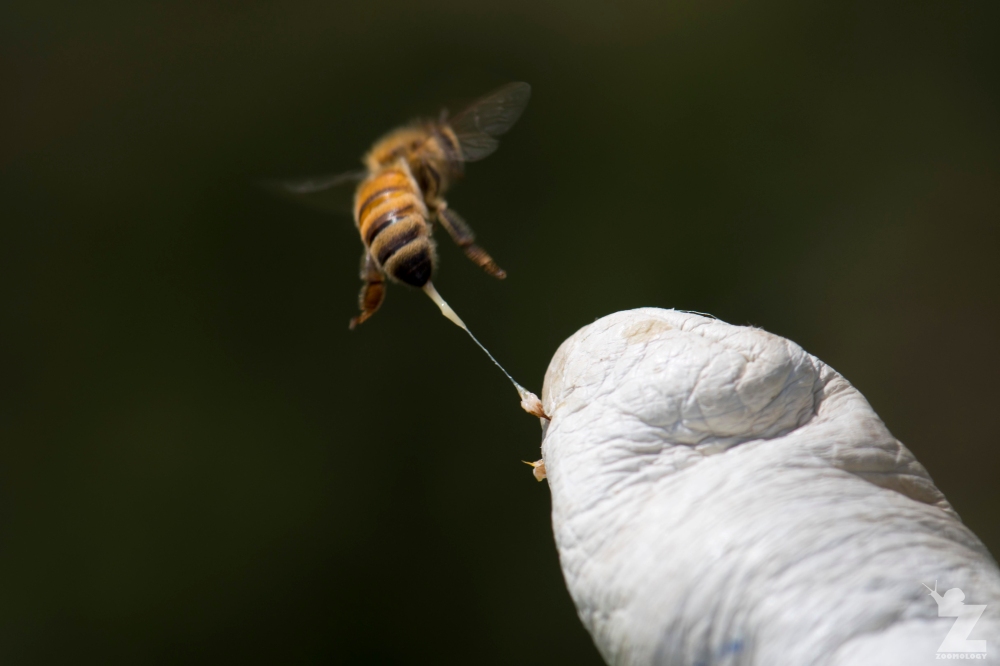